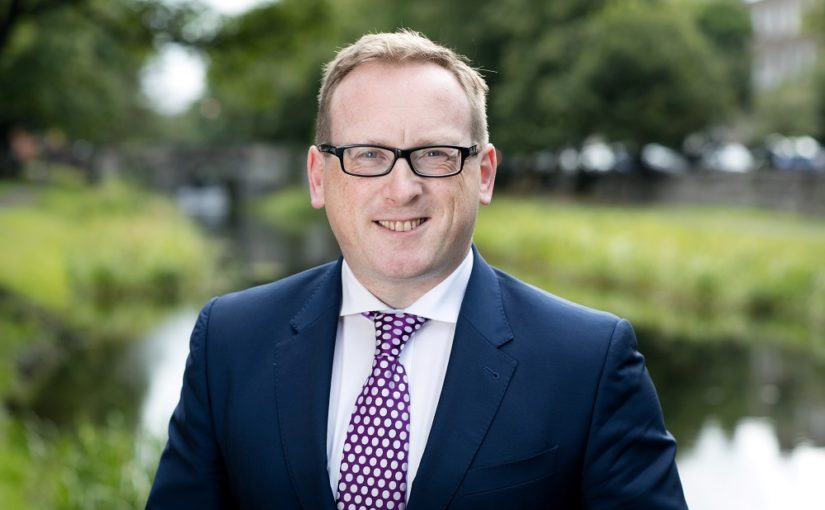 Chris is a partner on the audit team and oversees the outsourcing department for the firm.

Chris was born in Co. Armagh in the early 1970s. He is the oldest of three siblings, with a younger sister who is a pharmacist and his youngest brother a teacher. His mother was a nurse while his father was an accountant and the bursar of St. Malachy’s College in Belfast, one of the largest Grammar schools in the North. Chris enjoyed growing up in a close extended family group and vividly remembers uncles descending on the family home each Sunday to “robustly” debate the affairs of the day around the kitchen table.

Gaelic football was the main sport of interest while at school. Chris was a keen player in primary and secondary school but poor vision in his late teenage years put paid to that (this was a time before disposable contact lenses).

After studying at St. Malachy’s and then at St Michael’s in Lurgan, Chris went to university in 1992 to study Accounting at the University of Ulster. After graduation in 1995, he then followed his BA with a Post Graduate in Accounting at Queen’s University in Belfast, “a decision borne out of two drivers, firstly, a desire to postpone the dreaded day before I started work in a “real” job and secondly, to gain further exemptions from my professional exams once I did start work.”

Chris feels that choosing accountancy was more as a process of elimination (of the other “traditional” career courses) than anything else. He didn’t have the grades for medicine, wasn’t interested in law, was a bit wary of engineering, “looked a bit complex”, and felt his drawing skills were not up to scratch for a career in architecture.

However, he quickly found his feet in his chosen career path, “once I started in my first full-time job (with McKeague Morgan in Belfast) I quickly understood that accountancy was not really about numbers, it was about advising clients. The two partners in McKeague Morgan were very much advisors first and foremost and I think that rubbed off on me from the very start. It also helped that my personality lent itself to that role.”

After qualifying in 1999 as a Chartered Accountant, Chris left McKeague Morgan and Ireland and took a job with EY in the Middle East. It was there, in Saudi Arabia, that he met his wife Neena. It turns out she had emigrated from Dublin at the same time to work as a medical secretary and they met through mutual friends.

After four years, by which time they had married and had their first child Ryan, they left to return to Ireland. “Upon our return in 2003, I accepted an offer from a practice in Dublin but decided quickly it wasn’t for me and in early 2004 I joined Horwath Bastow Charleton, as it was then known.” Chris became a partner in 2011, and his remaining two children, Breanna and Edana, arrived in 2006 and 2007 respectively.

Chris maintains a strong work ethic and is very much focused on service delivery to his clients. “I am very results-driven and I expect the same from my team. But I am flexible and am open to people creating their own approach as long as they deliver quality results.”

His success stems from building lasting client relationships. “I ensure that my team spend the time to understand our client’s aspirations, goals and even dreams, in order that we can provide advice that is relevant to them and not a “one size fits all” solution. We strive to be the people they think of calling first whether it’s an opportunity or a problem they are faced with. We are usually quite good at that.“

Besides from work and his family, Chris enjoys travel and makes sure to get away to the continent each year with the family and several city breaks throughout the year with his wife. He is also a fitness enthusiast and enjoys eating out.