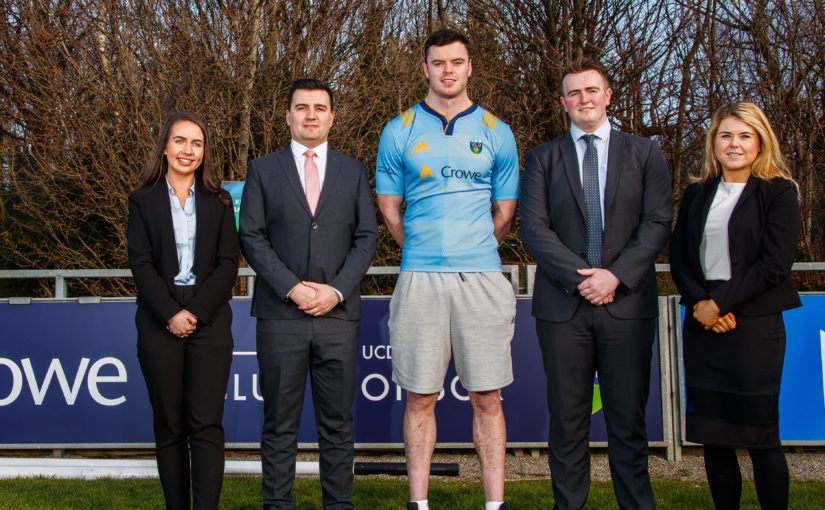 Pictured with James are (from left to right): Mary Keane and Jamie Ashworth, from our audit department with Patrick Foley and Amy Boylan from our corporate finance department.

As part of our ongoing commitment to the development of extraordinary talent and to mark our sixth season as official club sponsors of UCD RFC, UCD club member and current Leinster and Ireland player, James Ryan, meets with Crowe staff to answer their questions.

James, who is still only 22 years of age, has been passionate about rugby from a young age. “From about the age of five or six I always knew it was something I thought I was going to do. I was kind of a rugby nerd growing up.”

However, it was only after he got a growth spurt at the age of fourteen that he got serious about rugby. “I was about 6ft 3in when I was fourteen, 6ft 4in when I was fifteen.”

Q. Was it your dad Mark (former flanker for Lansdowne and Leinster) who encouraged you to pursue rugby?
A. “My dad loved rugby but to be honest I think it would have been something I would have loved anyway. I was good at it and as a kid you are naturally inclined to like things that you are good at.

I always watched a lot of rugby and I grew up watching Ireland, Leinster and Munster during a period where they had unprecedented success so that all played a part. But once I reached about fifteen then I started to think about it in more logical manner and felt it could be a realistic career.”

Q. How does he support you now that you play professionally?
A. “My dad would be a big support, not from a technical perspective more from support and guidance especially in the lead up to big games, which at times is not that easy. After games I would go through the game bit by bit and he, and my uncle, would give me feedback.”

Q. Who did you admire as a young player and who has been your biggest influence to-date?
A. “To be honest there was nobody that I looked at and said ‘I want to be just like him’, but there were some guys that I loved to watch. I loved to watch Stephen Ferris, Gerry Collins – anybody that was abrasive and got stuck in.

Nowadays Dev Toner has been a big influence on me. I have learned a lot from him, especially in my first six months to a year playing with him.

When I went on the Irish tour, before playing for Leinster, it was kind of nervy for me at the time and he took me under his wing. Then and since I must have asked him hundreds of questions and he was always very patient. If I was unsure about plays or calls he was the natural person I would go to. I hope that when I have the opportunity to be in that position I would do the same.”

Q. Your nickname is “Cheese” – tell us how that came about?
A. “It’s very random. It comes from a movie called, Why Him? Brian Cranson plays a character in that is called “The Big Cheese” and one of the lads watched it and the next day came in and randomly called me Big Cheese. But it wasn’t until Joe (Schmidt) called me it (Cheese) that it kind of stuck.”

Q. You started playing in St Michael’s which has some eighteen or so players currently playing academy or professional rugby. What is the secret ingredient that makes the school so successful?
A. “I think success. Michael’s wasn’t a big rugby school at all up until we won our first senior cup in 2007. From there things started to change slowly and we found real success by 2010, 2011 and 2012, when we won the double. Success is the main driver of that as kids watching in the stand are inspired by the success of the team on the pitch.

That’s one part of it. I think it is also down to the coaching team that came into the school like Andy (Skehan), Greg McWilliams (who won the senior cup in 2007 with St. Michael’s and is now backs coach of the USA team) and Emmett McMahon (current senior coach). They all came in at around the same time and brought a professionalism to the coaching approach. They also instilled a different mindset into the players.”

St Michael’s is well-known for implementing a unified coaching vision across the school, much like the All Blacks do with their Super Rugby sides, where every team plays the same way. St Michael’s now have two all-weather pitches, one of which is based on the Donnybrook back pitch, and a top class gym.

“The approach in St. Michael’s mirrored the professional environment, where you do you gym in the morning, you do you analysis at lunchtime and you are on the pitch in the evening.”

Q. Andy Skehan coached you from St Michael’s through to Leinster schools and UCD – how important has he been on your career?
A. “Andy coached me from about fourteen through to about eighteen, from St. Michaels into UCD, so he was a big influence on me. I would be good friends with Andy now and chat to him every week really.”

Q. As a former captain at St Michael’s College, Leinster & Ireland schools and Ireland U20, how did you find the transition from leading a team to being part of the squad?
A. “It wasn’t that difficult to be honest. I came into the Irish and Leinster squads on the back of a bad hamstring injury that had ruled me out for seven or eight months. So it wasn’t like I had come from being captain straight into the team. When you join a squad you need to prove yourself and even more so when you come back from an injury. Suddenly you find yourself rubbing shoulders with the likes of Johnny (Sexton) and Isa Nacewa – guys you had grown up watching – so there is an element of earning your stripes.”

Q. At a recent UCD RFC lunch, former All Black Sean Fitzpatrick talked about the feeling he and his fellow players had walking into the dressing room before their first test and seeing their country’s jersey waiting for them. It is a moment they will never forget – how did you feel?
A. “I didn’t feel very well! Myself and Andrew Porter were making our debuts that day and Cian Healy was very kind to us. He helped calm me down a lot. The build up to the game is nerve-wrecking. But once I got on the pitch and was lucky enough to score, celebrating with my family afterwards was one of the best days of my life.”

Q. What was the most daunting aspect of the build-up and ceremony around your first cap?
A. “There is a lot of detail you have to know in the build up to the match. There are a lot of plays and calls that you have to learn, so that was something I wasn’t used to and it took quite a bit of focus.”

Q. After that first cap against the USA in New Jersey in May 2017 you went on to play another 22 matches before experiencing a loss against Australia in the 2018 summer tour. Did you find the media attention around that distracting?
A. “Not really to be honest. I didn’t pay a whole lot of attention to it. The media were focusing on it but you don’t as a player.”

Q. When you played New Zealand and got that famous win in the US what was it like facing the Hakka for the first time?
A. “It was cool. It was one of those iconic rugby things that you grew up watching and now you are facing one. But to be honest I was looking up to the sky while it was going on because I was just thinking of the first kick off and the first few moments of the game and where I needed to be on the pitch.”

Q. What is a typical season for you – when do you get to have a break and what do you do?
A. “If I am playing internationally I get a week off after the autumn internationals. So I had a week off in November and went to Galway with my mates. My mum’s from there so we have a place in Connemara which I love going down to. Then hopefully if you play in the Six Nations you get another week off, before the decider games with Leinster. Once that finishes at the end of May you get three weeks off, where am hoping to go away with mates to Europe.”

Q. What about family holidays – do you get a chance to go away with your family?
A. “I haven’t been on a family holiday for four or five years at this stage. But we do get down to Galway a lot so we do get some time together. We have a house down there overlooking Lough Corrib.”

Q. What does a typical week in the Irish camp look like for you?
A. “Earlier in the week is when you are getting your main work done and it starts to taper off as you get closer to the game. So Monday and Tuesday are the bigger work days with gym, analysis and pitch sessions. We would be up at about 7.30am and finish about 6pm in the evening.

Wednesday is usually a day off, where you would get to go home on Tuesday evening before going back in Wednesday evening.

The last main session is on Thursday and then Friday is the Captain’s Run (a training session led by the team captain rather than by a coach), and you would have the rest of the day to yourself.

After the game on Saturday there is a reception and dinner with the other team and then back to the hotel. Then Sunday is a recovery day before ramping up again for Monday’s session.”

Q. You are a PRO14 winner, a Champions Cup winner, a Grand Slam and a Six Nations winner. At such a young age you have won (almost) everything there is to win in rugby – what is your ambition for the future?
A. “Lions is a big ambition, as is doing well in the World Cup this year. But I am not the kind of person to dwell on any of the accolades or achievements. I love winning – that is why I play the game and there is always the next game to win. I am hungrier this year than I was last year. Also I am by no means a finished product and there is so much of my game that I can be better at, so I am always looking to get better and improve my game.”

And finally, some quick-fire questions:

Q. Away games, which stadium has impressed you the most?
A. “Stade de France”

Q. Non-Irish player you most admire?
A. “Dave Pocock (Australia)”

Q. What song did you choose to sing as part of your initiation on the Ireland team bus?
A. “It was actually after the match in the reception, which was worse because you have both teams there and everyone’s families. It was Rapper’s Delight by the Sugar Hill Gang. It’s about a 12-minute rap and I did about four or five minutes of it. Nobody saw it coming!”

Q. Best and worst roommate to date?
A. Best: “Dan Leavy”
Worst: “Andrew Porter – because he snores too loud and I can’t sleep.” 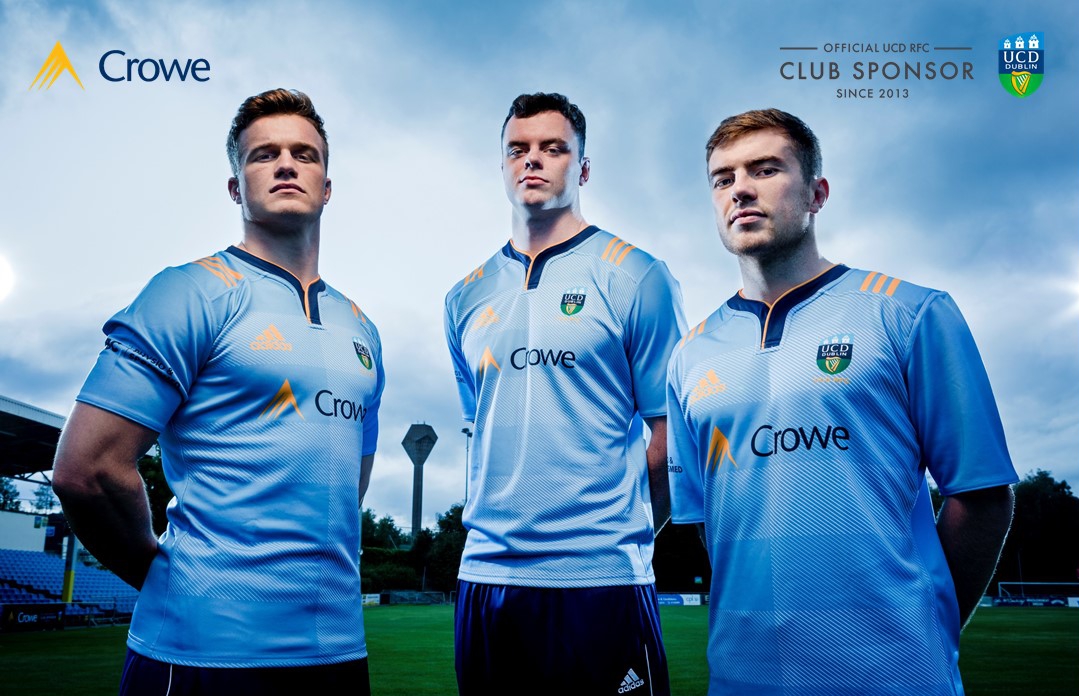