Home » About Us » History of the Firm

History of the Firm

Crowe has a long and proud tradition serving our clients. For over 75 years we have been supporting and growing Irish business. While we are proud of our heritage and success we are always looking to the future, finding new ways we can help our clients make smart decisions today that create lasting value for tomorrow. 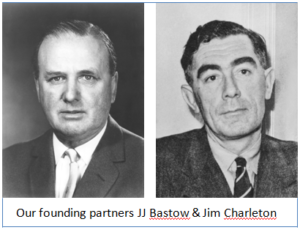 Crowe in Ireland was established in 1941, by JJ Bastow and Jim Charleton. Bastow Charleton, as the firm was originally known, was based in Cavendish Row, Dublin 1. The firm’s early clients were cattle dealers attending the weekly marts at the Dublin Cattle Market situated off the North Circular Road on Prussia Street.

The practice quickly established a strong presence in the meat and metal industries. A number of clients in these sectors from the 1940s and 1950s are still clients today.

After a short period the practice moved to 8 Upper O’Connell Street, before moving again in the late 1950s to 7 Gardiner Row, Dublin 1.

In the early 1960s, Jim Charleton died from cancer and his brother Joe took over his interest in the practice.

Joe Charleton became a driving force in the expansion of the practice during the 1960s and was recognised as one of the leading tax practitioners in the country. The firm has continually developed a reputation as a leading tax practice, with partners Terry Cooney (1988-89) and Andrew Clarke (1994-95) serving as president of the Institute of Tax in Ireland.

Following a fire that destroyed the Gardiner Row premises the firm moved briefly to 24-26 Fitzwilliam Street in Dublin 2, before settling into its current home at Marine House in 1978.

JJ Bastow continued to be involved with the practice until his death in 1980. Joe Charleton retired a number of years later.

Between 1989 and 1993 Bastow Charleton merged with two young firms, Hogan Kenny Matthews and Clarke and Conroy O’Neill respectively. This paved the way for further growth over the next number of years.

In April 1995 Bastow Charleton joined forces with Horwath International in order to service the needs of our clients operating internationally. The firm changed its name to Horwath Bastow Charleton and its then managing partner Andrew Clarke served as a global board member of the network for a number of years.

As the firm grew, it developed industry specialisms. The firm published its first annual hotel survey in 1995. This was followed by the establishment of a specialist division supporting the TV, film and animation industry in 1996. The Corporate Finance division became market leaders in the property and construction sector.

In the mid-2000’s the practice developed a management consultancy practice area, focused on the not-for profit and government sectors.

In 2012, the firm adopted the name of the international network, which had become known as Crowe Horwath.

In 2013 the firm became official club sponsors of UCD Rugby.

Newmarket Partnership, a specialist corporate firm, joined the practice in 2014 to grow our Corporate Finance activities in the SME sector. This was followed in 2015 when the practice joined up with Newmarket Consulting, a boutique strategy and marketing consultancy business.

The firm hosted the 2018 EMEA Regional Conference for the network. We welcomed over 140 delegates from more than 35 countries to Ireland. Highlights from the conference include a special trade meeting between IDA and several European member firms, an opening ceremony showcasing Irish traditional music and dance in a contemporary way and a Gala Dinner in Trinity College Dublin with a unique performance by the a cappella group The Trinitones. In July 2018 the firm adopted the simplified name of Crowe along with over 220 member firms.